Salvador Dali, known for his paintings, drawings, and even his own writings, was also an illustrator for many books. “Dali worked in this field of creation so often because, rather than an amusement, the work was a necessity for him. Dali had to express himself and any medium that allowed him to do so was valid.  That was why he never missed an opportunity to work in publishing,” (Dali, a life in books, p.344).

This series of digital exhibitions, broken up into several parts, will focus on illustrations Dali created for commercial books, some of which are rarely seen.  This series will also focus on the symbols Dali inserts into the illustrations, promoting his own iconography.  “Salvador Dali used symbols repeatedly in his artwork.  He was influenced by Sigmund Freud’s idea that dreams can be understood symbolically – where each image has its own interpretation – Dali approached his work this way” (Dali Museum-Peter Tush, Curator of Education).  Shown here in the book illustrations are the main symbols, as well as other Dali symbols.  Viewers will then be given an opportunity to discover the same symbols in works from The Dali Museum Collection. The use of these specific symbols shows how Dali inserts himself throughout his artwork, even in books.

“Don Quixote, written by Miguel de Cervantes, is considered to be Spain’s most import[ant] work of literature and the first truly modern novel. The story takes place in sixteenth – century Spain and details the exploits of the self-proclaimed knight Don Quixote of La Mancha and his faithful squire Sancho Panza.” – description from Dali By The Book exhibition file, 1996) 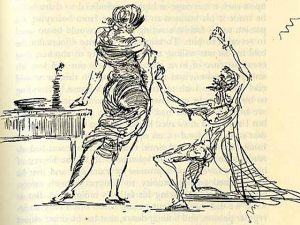 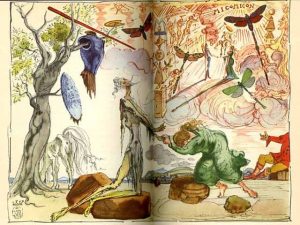 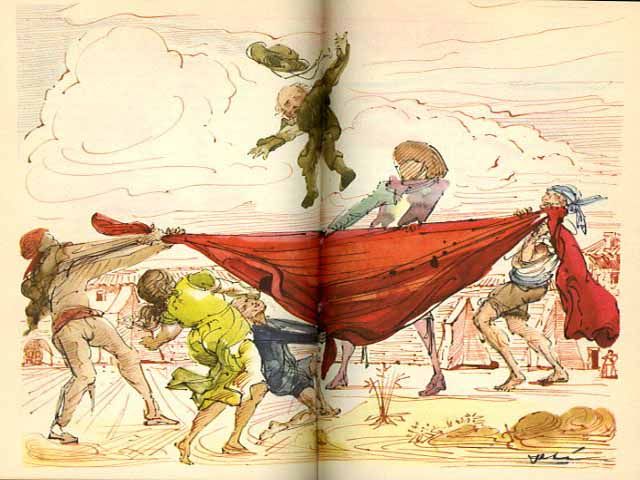 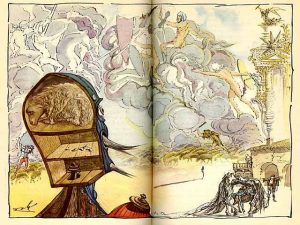 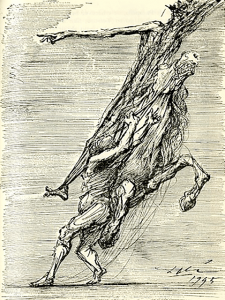 There were other popular commercial editions that used some of the same images from the English 1946 edition, but included extra drawings and watercolors.  One was a 1965 Italian TEMPO edition that included new watercolors. 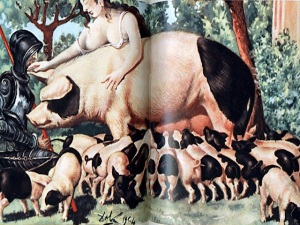 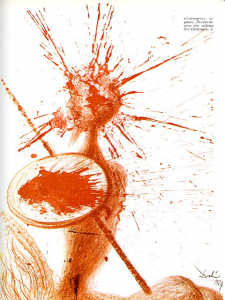 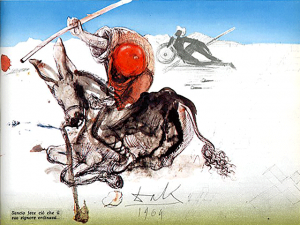 Some of the drawings from the 1946 edition became works of color in the Italian edition. 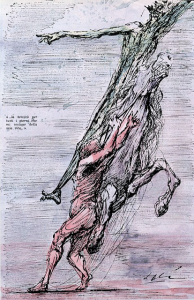 The two volume Spanish edition was published in Barcelona.  “It is a hodgepodge of his earlier illustrations, starting with the original English edition [1946].  It includes reproductions of Foret’s plates and also of the watercolors done for the Tempo edition in Italy…There are many new illustrations, especially in the second volume. (A Dalí Journal, VI p.205, September 21, 1967) 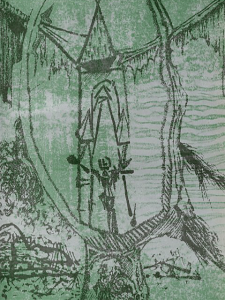 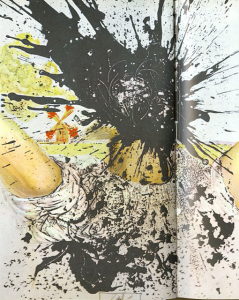 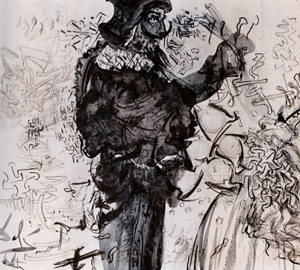 The famous windmill scene of Don Quixote is depicted differently in the English and the Italian edition.  The 1946 version uses Dali’s famous paranoiac-critical method, where the windmill is seen inside Don Quixote’s head (or imagination) as a knight.  In the right hand top corner, Dali brings a windmill to life as a knight who is being jousted by another (presumably Don Quixote) on an elaborately drawn horse.  The Italian edition’s watercolor is more of a realistic version with the windmills seen at a distance by Don Quixote and his sidekick Sancho Panza.  The muted blues and yellows of the sky dominate the work in a realistic fashion. 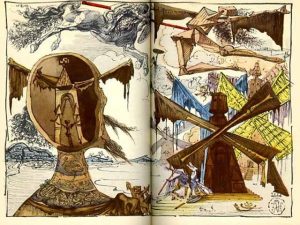 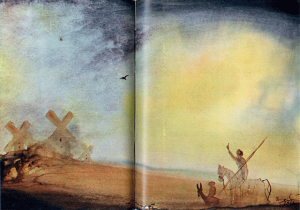 “Dali connects the egg to the prenatal and intra-uterine in his Surrealist works. He believed he had memories of being inside of his mother’s womb with which he called an “intra-uterine memory.”  He uses eggs throughout his artwork to symbolize hope and love.  He relates the yolk of eggs to the intense gaze of his wife Gala.  In Christianity the egg is a symbol of the resurrection of Christ and the emblem of purity and perfection.  Eggs in Dali’s later works, such as Geopoliticus Child Watching the Birth of the New Man, 1943, became a symbol of purity and perfection.  Not only did he use eggs in his artwork, they adorn the top of his home and museum in Spain,” (Dali Museum).

Dali inserts eggs into the illustration of the Curate and Barber, pictured here. 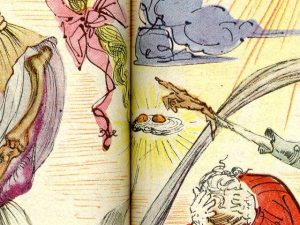 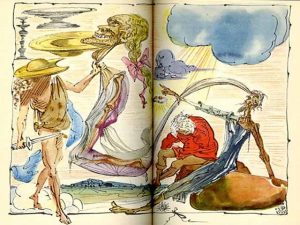 These eggs look like the eggs in Oeufs sur le Plat sans le Plat [Eggs on the Plate Without the Plate], 1932, where there are two fried eggs on a plate.

Though not a symbol, Dali’s muse and wife Gala is represented in one of the Italian illustrations with her iconic Chanel bow. 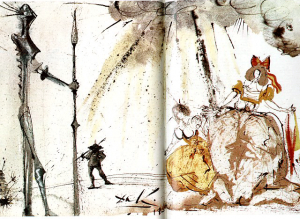 One common element in all these books illustrated by Dali, and in many of Dali’s paintings as well, is the use of landscape.  This can be in the far distance, or more towards the foreground.  “As with all his work, the landscape is geographically specific to Dali’s native region…,” (The Dali Museum Collection, 2012, p. 150), and in The First Part of the Life and Achievements of the Renowned Don Quixote de la Mancha Dali makes no exception.  Below is one such example from Don Quixote of Dali’s iconographic landscape. 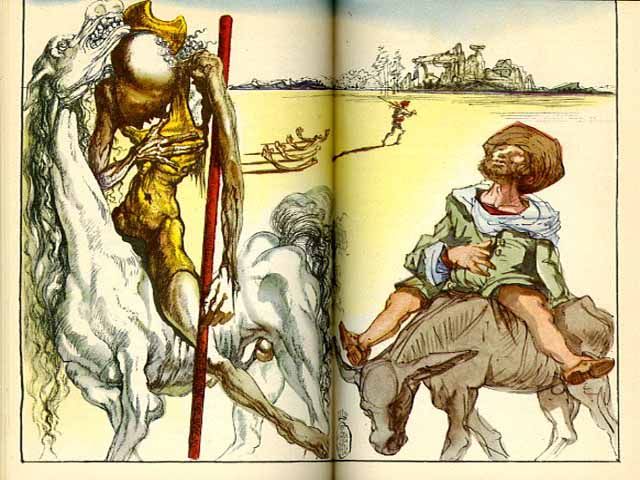 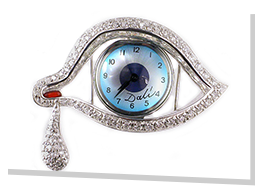 Calling all #PinellasCounty residents! Join us for a SURREAL experience when you visit The Dalí Museum for #Free th… https://t.co/7D1NT7RLRr